3 Secrets For Martians And Venusians To Have Relationship Bliss 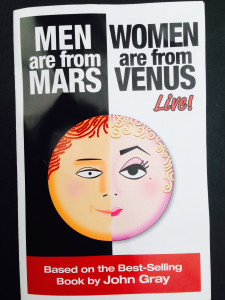 I saw a great play in New York City last weekend that every couple should see. The play is named after the book that it’s based on, John Gray’s International Best-Seller, Men Are From Mars, Women Are From Venus. What a blast!

A one-man show, Peter Story (yes, that’s his real name), shares his relationship… well … story… about he and his wife, Megan. Revealing, funny and so completely right on, Peter captures the differences of how men and women experience life with one another. When Peter described how his wife could multitask (make a great tasting pasta dish, change their child’s diaper, clean up toys and answer the doorbell all while having a full-on and in-depth conversation with her best friend on the phone), while he, on the other hand, was lucky to get the water boiling for the pasta in the same amount of time. As Peter shared his tale of relationship mishaps and misunderstandings, both genders in the audience laughed hysterically and nodded our heads vigorously, totally identifying with what he was communicating.

Not only is this play delightfully funny, it’s also packed with information that couples really need to know about one another. For example, women need to receive caring and understanding while men need to receive trust and acceptance. And, women treasure respect and devotion while men treasure appreciation and admiration. Last, but not least, women crave validation and reassurance while men crave approval and encouragement.

Over the many years of working with couples, it’s clear to me that partners share the same nuptial goals and intentions – a long lasting and loving relationship. However, men and women speak a completely different relationship language. Even brain chemistry is different between the sexes. In terms of the brain, the majority of the blood flow for a woman is in the right region, whereas the majority of the blood flow for a man’s is in the left region. In other words, she’s more focused on sharing and communication while he’s more focused on problem solving and doing.

What then, are the secrets to Martian men and Venusian women cohabitating in relationship bliss? Three main secrets!

Secret #1- Stop taking everything so personally.

The truth is that it’s not about you. Whatever they say is really about them. If you do take it personally, then you may be judging yourself the same thing. If that’s the case, then it’s time to explore some self-help books, therapy and/or a meditation practice. I’ve made it easy for you to begin a life-changing meditation practice. Join the Miracle Mondays Meditation community where you will receive complimentary guided-meditation audios right into your inbox every week!

Secret #2- Stop making everything so serious.

Keep things light. Ask yourself, What am I making so serious, that if I didn’t make it serious, would actually give me peace? Just by asking yourself this question several times in a row, you’ll begin to feel lighter and even laugh about that thing you were taking so serious just seconds before.

Instead, focus on what’s right. Tell your partner what you love about them, not what you don’t like. Happy couples understand the 5-to-1 rule. They focus on or say five wonderful things and only one not-so-wonderful thing per day. Try it! It’s worked wonders in my marriage and I know it’ll work wonders in yours, too!!

Now that you know the secrets to relationship bliss, take your partner out on a date and see the Men Are From Mars, Women Are From Venus play and enjoy each other’s company!!